The idea was born while I was brainstorming viral marketing ideas. It evolved into a plan to spread great ideas of all sorts. Yes, it took a while for me to write the code. But now it's finally ready to go.

What is the 1+1=4 Project? It's a vision. It's a philosophy. And now it's a website you can use to get involved and recruit people to your great ideas.

If you want to change the world, how do you spread your influence? Unless you're King Midas, you don't buy up a bunch of media and politicians and push your ideas out on the world. Instead, you get people involved, and they spread the movement in the most powerful way possible: person to person.

Think about it -- which are you more likely to respond to: an ad or a friend? Yeah, the friend wins every time. You know them. You know they don't have a hidden agenda. You trust their judgement. So the best way to spread ideas is person to person.

A recent example that proves the point is the ALS Ice Bucket Challenge. Thousands upon thousands of people poured buckets of ice over their heads to raise awareness of a disease called ALS. Why? Because some company spent a fortune advertising how great an idea it was? No. Because someone they knew issued the challenge directly to them.

Here's my philosophy: the smaller and simpler the better.

Given the choice, most people will choose "small" and "simple". And that's okay. Our lives are already filled to overflowing with commitments and complexity. We'd like to make a difference, but nobody has time for everything they'd like to do.

Sure, there are people in the world who will take on big, complex challenges. But if you want to start a movement, you'll get a lot more milage asking a little of a lot of people than a lot of the few who are willing and able.

So the key is to find a way to turn small commitments into big results. That's why the 1+1=4 Project only asks you to recruit 2 other people to each project you chose to participate in. And the great thing is that that's all it takes. If you follow through on that one small commitment, you'll have done your part to double the size of the project. Then it's the job of the 2 people you recruit to help double it again. And so it goes.

This website is now yours to use to find worthwhile projects to participate in, to post your own projects, and to use the tools we offer here for free to change the world. 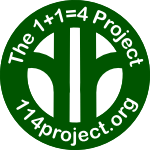